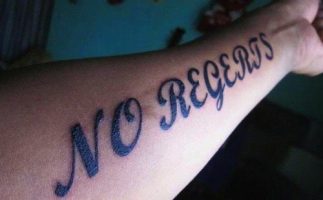 Random question time! Ask someone you know of a regret they have in their life and you’ll likely get two broad categories of response. One – I don’t have regrets, because without my past I wouldn’t be where I am today. Two – I have so many things I wish I hadn’t done and I look back constantly at them in sadness and shame.

And not long ago, I would have been in the first category. Almost a flippant attitude about things that have happened in the past. And not wanting to dig too deep into something that I might actually want to take back, because that might bring up uncomfortable emotions or require an apology. Worse, it might point out an area where I need growth and I can’t let people know I “failed” before. So the solution is … “no regrets!”

Regrets As A Positive

But then I was introduced to “We can do hard things”, Glennon Doyle’s podcast. I mean, I was aware that it existed but hadn’t listened beyond an IG clip here and there. Episode 78 was very thought provoking for me. They discussed two main points related to regret. One, the simple fact of HAVING regrets meant that you lived, that you make some freaking decisions at some point. Two, and the bigger point for me, is having regrets means that growth has occurred. If I have the same philosophy now as I did two years ago, why would I regret behavior I had back then?

Let’s say that money is the ultimate goal in Sally’s life, and she spends all her energy trying to “get rich quick”. She abandons friends and doesn’t sleep and misses weddings and mainlines 5hr Energy all day. Only after her philosophy changes (let’s imagine it was a health scare for her) and there is personal growth can she look back and say “I regret making money the most important thing”. The simple fact that there IS a regret means that progress has been made.

My Regret (at least one of them)

So … what’s a big regret I have? That I wasted potential. I was a two sport athlete in high school and very possibly would have had a state title if I hadn’t gotten hurt my senior year. I received a scholarship to play in college that paid for a good chunk of my education. I started more than my share of games and have some cool stat lines to show for my time playing. I played all 4.5 of my years in college and have some wonderful memories of my time as a collegiate athlete.

But did I do any extra work to get better? Did I work on my ball handling or shooting? NOPE. Did I do defensive slides or extra strength work? Nah. I worked hard in practice and did all the conditioning with the rest of my teammates and such. I lifted weights and complained about early morning track time. And I loved to play so lots of pick up hours over the years. But no actual dedicated work, on my own, to get better at my weaknesses or develop new strengths.

Would have I gone Division I if I had done extra practice? Probably not, as no amount of practice was gonna make me taller. Still wasn’t gonna play in the WNBA. But I’ll never know how much better my teams could have been, if I was contributing what I was capable of. So tis a regret of mine.

HOWEVER, I’m looking back on it with new eyes. Because I know I had more to give then but I lacked the dedication, I can now work to put myself in situations where I’m held accountable for my commitment. I look at the world differently now so I can see where I could have adjusted behavior back then. I can take the lessons from that regret and strive to “fail forward”, meaning I’m not gonna make the same mistakes again.

Imma go out on a limb and say you have a regret or two in your life. Let this be your encouragement to look at the regrets as a way of seeing how far you have come! And an admonishment to fail forward and make new mistakes. Things you are doing today, you might come to regret in 5 or 10 years as we keep growing and maturing.

If you are looking for a sign that it is time to take your health and fitness more seriously, come join us April 11. It’s Mon / Thur at 630p for 6 weeks and designed for folks who have never “worked out” or it’s been a long time. We can help anyone take some steps forward and raise their personal bar. We are partnering with the City of Pickerington for this one, so please click HERE to sign up!